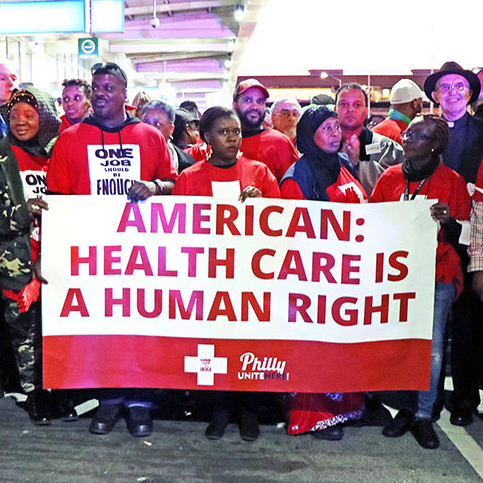 The backbone of UNITE HERE’s organizing is the belief that One Job Should Be Enough—enough to pay bills, go to the doctor, and to retire with dignity. Too often, though, workers are forced to hold down two or three jobs just to get by.

But being a UNITE HERE union member changes people’s lives. Over the years, we have fought to win competitive wages and necessary benefits for union workers across the U.S. and Canada. Beyond our commitment to winning good contracts, we also have succeeded in organizing more people into our union, becoming the fastest-growing private sector union in the U.S. One Job Should Be Enough for all working people.

Here are a few of our stories:

Access to high quality healthcare should be a right not a privilege, which is why our Union has fought for decades to create ways for our members—from housekeepers to kitchen workers—have access to gold standard family care at little to no cost.

In places like Las Vegas, Atlantic City, Chicago, and New York, we’ve even built our own non-profit health centers, providing top-notch, cost-effective care for our members and their families. Nearly 1 million Americans receive care through our not-for-profit plans, which have been cited in The New York Times and elsewhere as a model for how ordinary working people can get great health care.

The willingness of UNITE HERE members to take on an opponent, no matter now large, has transformed work in the hospitality industry. From hotels to casinos to airports and corporate cafeterias, we’ve organized to turn jobs once characterized by impossible workloads, low wages, and reduced health care into middle-class jobs that allow workers to support their families in an environment of safety and respect. This proven track record means we never shy away from a fight, even if it means striking the world’s largest hotel company. For nine weeks in 2018, 7,700 UNITE HERE members from eight Marriott locations across the U.S. held the line in the largest hotel worker strike in modern history. The workers’ message: One Job Should Be Enough! The strike resulted in a tremendous victory, as union contracts at all eight hotels secured historic-level wage and benefit increases, including 40% wage increases in San Diego. In Boston and San Francisco, hourly wages for hotel housekeepers now start above $24, with additional raises to come. Contracts also secured sexual harassment protections including safety buttons, a seat at the table for workers as the hospitality industry addresses automation in hotels, and more. In Nevada, the Culinary Workers Union Local 226 and Bartenders Union Local 165 have fought for 85 years to secure a strong middle-class standard for working families. 60,000+ worker members can count on fair wages, job security, and one of the best healthcare benefits in the country. The average Culinary Union member earns $26 an hour with free job training at the Culinary Academy of Las Vegas, up to $20,000 free down payment assistance through the housing fund, free legal defense, citizenship project, a guaranteed pension, and more. Las Vegas has set the bar for the industry, and our union is quickly spreading its reach in the gaming industry in regions across the U.S., including the Deep South. Many UNITE HERE members in the food service industry now have jobs with some of the best standards in that industry. Since 2015, 4,500 workers at cafeterias of tech companies across the country have joined UNITE HERE. They’ve won benefits including free family health insurance, pensions, transportation and housing benefits, and protections for immigrant workers. Several tech companies have adopted a $20 minimum wage since we started organizing. In airports, we have won wage policies for at least 20 U.S. airports that increase pay for thousands of workers in terminal restaurants, airline kitchens and other airport jobs. In New York and New Jersey, minimum wages for airport workers were just $10.45 in 2018 but will be $19.00 by 2023.

In Nevada, 60,000+ casino worker members of the Culinary Workers Union Local 226 and Bartenders Union Local 165 can count on fair wages, job security, and one of the best healthcare benefits in the country. The average Culinary Union member earns $26 an hour with free job training at the Culinary Academy of Las Vegas, up to $20,000 free down payment assistance through the housing fund, free legal defense, citizenship project, a guaranteed pension, and more.  As gaming has expanded in recent years, UNITE HERE has organized to ensure that the good union jobs of Las Vegas and Atlantic City are replicated in new gaming markets. From rural Mississippi to upstate New York, organizing in casinos has brought the security of union jobs to places outside of major cities.

Hospitality workers in union casinos have won wages significantly above the median for the same occupation in their region.